Skip to content
April 10, 2019
The Hainan Provincial Meteorological Bureau recently completed the installation and commissioning of the first ship weather station in the South China Sea on the Xisha supply ship â€œQiong No. 3â€ and built the Nanhai Sea Surface Automatic Weather Station. The completion of the station plays an important role in further improving the weather forecast and warning level of the South China Sea and enhancing the capacity of the South China Sea for disaster prevention and mitigation.
â€œQiong 3â€ is a passenger-cargo mixed-ship ship weighing approximately 2,500 tons. It is between the Wenchang Qingyu Port and Sansha Yongxing Island from time to time. It is the lifeline of Yongxing Island in Sansha City and even the entire Xisha Islands. .

A chopper bicycle is a highly customized bicycle whose design, construction and style is similar to that of a chopper-style motorcycle.

While the term "chopper" is generally used to describe a motorcycle or bicycle that has had some of its original parts replaced with custom parts, today's definition has grown to include custom motorcycles and bicycles that are low to the ground, usually with extended forks creating a long front end. Even as commercial interests are taking note of the popularity of choppers and expanding their lines, most riders of choppers have hand built choppers and encourage others to make their own.Arguably, a bought 'chopper' is not a 'chopper' at all, because no chopping was done-only a commercial transaction.

Because the frame of a chopper bicycle and a chopper motorcycle can be strikingly similar, and of a high enough quality/durability, it is relatively common to have an empty space, or 'engine bay', in the frame, in which a motor can be inserted into the frame at a later date, among other tweaks and conversions. Depending on the quality of strength of the frame, and the engines size and output, this can result in blurring between the classifications of bicycle, moped, and/ or motorcycle. Legal laws and statutes may vary in your local state or territory. 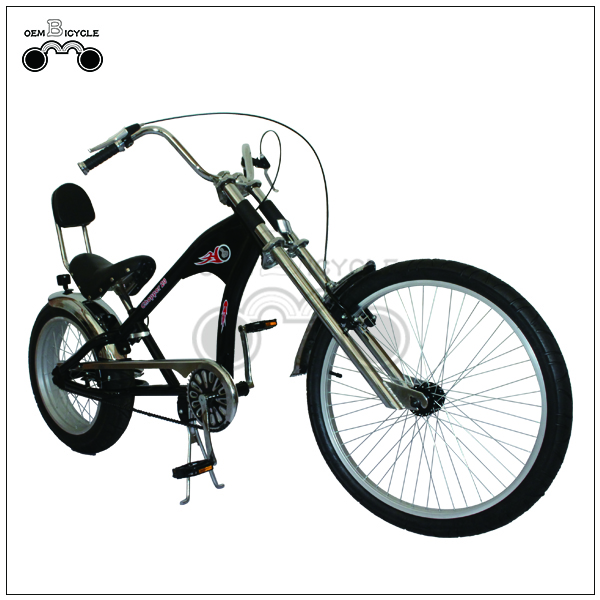